The Ronin-class vessel was originally conceived at the end of the Dominion War. With the immediate threats of both the Borg and the Dominion dealt with, Starfleet turned its attention to what the Federation lacked during the war which could have helped gain the alliance victory over the Dominion much sooner. One of the answers determined by this study was the need for vessels capable of deploying large numbers of soldiers quickly. A design brief was quickly submitted, requesting a Starship that could be operated by a relatively small number of Starfleet personnel but could carry a battalion of troops comfortably enough for long periods of time, deploying them quickly and efficiently when necessary.

For many years, the Nebula-class had been a venerable scientific workhorse in Starfleet. With its interchangeable pods, it had had both versatility and easy manufacture as winning points, but it was getting long in tooth. Starfleet's latest advance had been the Sovereign-class vessel, and the designs had proven robust and well suited to various mission profiles. Taking advantage of a tried and true concept and merging it with the latest technology was an easy decision, and thus the idea for the Ronin-class vessel was born.

Using design methods applied to the Defiant-class starship, the spartan, compact internal design allows for the large number of soldiers as well as the minimal number of personnel to operate such a vessel in addition to the tools, weapons, equipment and vehicles the Marines utilise regularly.

The weapon systems aboard the Ronin-class make her a very capable vessel during combat situations. The combination of 8 Type XI Phaser Arrays which are not as powerful as the Type XII, but have a much faster firing rate, 2 Type U Pulse Phaser Cannons and 4 Torpedo Launchers gives the Ronin much needed muscle when required.

Overall, the Ronin is a very capable combat vessel and is a much needed addition to Starfleet's defensive forces.

Well twice as many torpedo's as the Excalibur class, but at least not as bad as the Diligent's first proposal. I'll be doing a more comprehensive...review later on but on the face of it, it is looking quite intuitive.

Has this been approved yet?
“Your job is to keep holding on, even when you think you can’t”--Captain Janeway
Top

I like the idea, but are we going to keep the Nebula?
Top

Aye, we'll definitely be keeping the Nebula class. It's similar to how real world R&D works; a new design might be designed specifically to be the 'new model' to perform the tasks of an older design, but the older design won't be replaced immediately, and in some cases will continue construction. If you take a look at iPhones just as an example; though we've gone on to the 4, the 4S and soon (we think) the iPhone 5, the 3G is still being produced and sold, and a lot of people still have the older design, because it's still useful.


Any design that gets brought in to the fleet and approved, regardless of what it's IC design brief is, will never actually 'replace' any of our existing classes; hell, we've still got the Miranda class and Excelsior class around, because they'd still be in use in the fleet IC

Just in case anyone's curious about the looks of this bad boy. 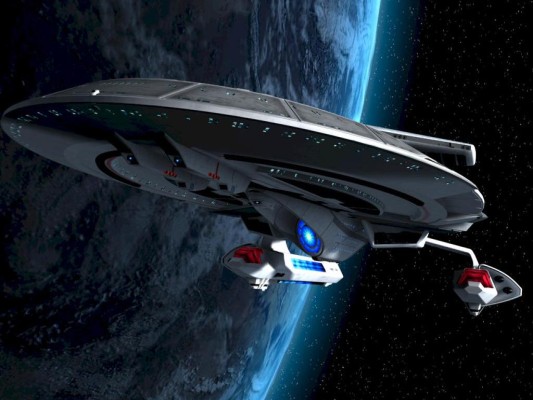 There doesn't seem to be any objections to this one. I'll give one last call, and if there is nothing further in three days, then we can consider this one approved.
Fleet Admiral Emily Quinn
Commanding Officer
11th 'Pegasus' Fleet

I actually have a few pictures...
Top

This would never replace the Nebula. It's a more of a battleship than a support ship.
Top

Captain Enor, would it be possible to see some of those additional shots? I think this ship would make a great SIMM as a fast reactionary force to quell hot spots in battle and across the Federation. A sort of Amphibious Landing Ship of the Star Trek Universe. Very cool.
Top
Post Reply
10 posts • Page 1 of 1