Below is the link to the updated and expanded article I've written on Cestus III, the fleet's headquarters location. I'd appreciate anyone with a critical eye giving it a look, and if people are happy with it, we can put it through for GACification, hopefully followed by putting it up for PFCanon.

I- for one- am very pleased with this.

I had a question in regards to this city; is it a large city or more or less a town? I had it in my head something out of Firefly, but I wanted to check, as I have a character headed there and I'd like to stick with general canon.

If there isn't any official canon surrounding this, does anyone mind if I make something up for it? I have been known to have made a few cities/towns/settlements and planets in my time, and I think I could probably give it some good treatment.

That is, if no one else has. (There really isn't any official canon information out there about the town)

I went ahead and started to describe it, partly because the JP has just been steadily progressing.

I described it as something of a desert town, similar to old western towns. Buildings aren't made of wood, rather they are dome-shapes structures that appear to be made of some sort of mud or brick, smoothed out. This would be easier to repair and maintain in a town on a dry, arid planet (which is how Cestus is described for the most part.) Since New Jericho's location was never mentioned, I don't really mention it either.

The only structure of note is a large Starfleet clinic at the eastern edge of town, it is the focal point of the log I am writing. I imagine it was placed there to help the townsfolk, probably because the settlement is rather poor.

Beyond that I left a lot of it rather open-ended.

This is the map that I used to base the article off of for geography: 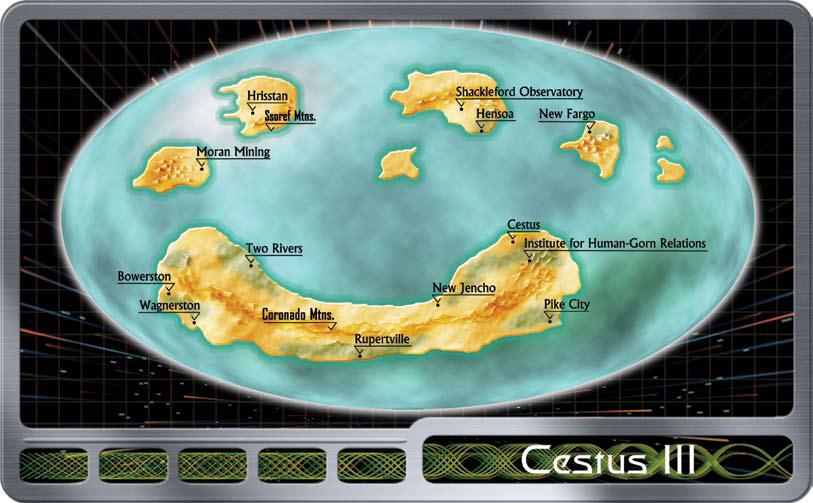 Most of the planet is, as you said, generally dry, with the odd mild storm providing needed moisture. However the slightly greener parts of the map I picture to be grasslands, farms or forests - New Jericho is in the dry area, so that should fit in nicely with what you're going with

The Cestus which is mentioned on the map I would imagine to be the old Cestus Outpost destroyed by the Gorn in Kirk's time, and would likely still be in ruins (a potential plot point for someone if they want to find people hiding out in it - it would likely have some extensive underground tunnels and facilities to it)

Outside of anything in the article, we've not got very much established for any of the other settlements, so you're free to expand as you like. If you've got something you'd like to add to the Canon, you can propose the addition in the main GAC section and send it through the process

Just for reference, here's the section of the log concerning New Jericho. It wasn't a large portion of the log (which ended up being roughly fifteen pages long), and I largely avoided being overly specific;

Glare-shades, thick, round, and dark, glinted in the high sun. The air was dry and hot, and dust kicked up as the car ripped across the barren wasteland.

New Jericho looked like a town on the edge death; sandstone structures built like dome mounds in the middle of nowhere, clustered around what appeared to be the only source of water out this far; a single well. Stern pulled back on the throttle and the car slowed to a crawl.

He peeled back the glare-shades and blinked a few time; the sky was a sharp blue, almost painful.

Elizabeth found the atmosphere fascinating. As she adjusted her eyes to the change in light, she started internally going through all of the biological intricacies of the climate, unaware of being looked at.

Townsfolk watched them as the car glided through the dirt street; old men and women, weather-worn and thin, as well as children and young couples just starting out, all stopped what they were doing to stare at the Starfleet Officer's passing through.

While Starfleet certainly had a presence on Cestus III, it was clear that they did not have much of one here.

"Where do we go from here?" she asked casually, her mind more on the science of the area then on the purpose of their being there.

Thanks for the global map (though it looks like there is a significant amount of water, or certainly a lot more than I had initially thought based on what I've read!)